A Report on Irregular Migration and Human Trafficking

A Report on Irregular Migration and Human Trafficking is a joint project of Center for Migrant Advocacy Philippines (CMA) and Mujeres Inc. Women United for Justice and Equiality toward a Responsive and Empowered Society and was funded by the South East Asian Committee on Advocacy (SEACA)
We Encourage reproduction of this report without prior authorization. Please inform the CMA Secretariat amd MUJERES, Inc. of its use.
Dec 05, 2007

The 4th AJG Forum Series for year 2007: A Round Table Discussion on The Effectiveness of Migrant Workers’ Education and Information was held last December 7, 2007 at the Balay Kalinaw, University of the Philippines, Diliman, Quezon City.
Sixty four members and officers of major stakeholders – from government, local and international migrant rights advocacy groups, trade unions, academe, church-based groups, members of media and migrants themselves participated in the discussions.
Dec 01, 2007

Dr. Alfredo J. Ganapin Forum III, Year 3 %22A Call to Action- Know your Rights, No to Illegal Recruitment and Trafficking%22

The Center for Migrant Advocacy (CMA), in partnership with the YMCA Philippines, YMCA Baguio, the City Government of Baguio, and Friedrich Ebert Stiftung (FES) held a forum on “A Call to Action: No to Illegal Recruitment and Trafficking” on September 14 at the Sangguniang Panglungsod Session Hall in Baguio City. This is the third installment of CMA’s 2007 series for the Dr. Alfredo J. Ganapin Advocacy Forum. The participants included officers and representatives of the Baguio City council, media, migrant-concerned NGOs and church-based groups based in the region and members and leaders of the barangay councils.
Oct 30, 2007

Final Statement of Task Force on the ASEAN Migrant Workers

On September 24, 2007, a national consultation was convened in Manila by the Task Force in ASEAN Migrant Workers. This was the 4th country-based consultation, following Malaysia, Indonesia and Thailand. The consultation produced a Manila Statement that contains two sets of recommendations –one for the ASEAN body as a collective and one for the Philippine government on the ways to move forward the commitment to promote and protect the human rights of overseas Filipino migrant workers and their families as well as the other migrant workers in ASEAN. The Manila Statement was submitted to the ASEAN Affairs of the Department of Foreign Affairs and the Department of Labor and Employment. It will also be submitted to the DFA Office of the Undersecretary for Migrant Workers Affairs (OUMWA).
Sep 24, 2007 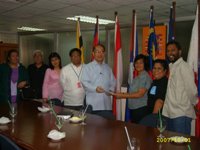 The Second Dr. Alfredo J. Ganapin Advocacy Forum Series 2007: “Promoting and Fulfilling the Human Rights of Migrants: Revisiting RA 8042 and Beyond” was held last June 29, 2007 at the University Hotel, University of the Philippines, Diliman, Quezon City.
The Forum drew the participation of 62 officers and representatives of the executive and legislative branches of government, non-government organizations concerned with migrant issues, as well as those of overseas Filipino workers (OFWs).
Aug 30, 2007

As a country, the Philippines is the largest single contributor to the world’s merchant fleet. Despite perceived competition from other supply states, the numbers of Filipino seafarers onboard are increasing. Shipping companies appreciate the general character of Filipinos and their linguistic and professional abilities.
Mar 15, 2007

In 1999, POEA recorded 1,439 abandoned families; in 2000, the figure stood at 1,344 . While the figures may not yet speak of a critical situation, the fact that more than a thousand families had reported their abandoned situation with the POEA does not augur well in light of the declared intent of labor migration in favor of the family: a way out of poverty and a way towards a better future for everyone.
Mar 16, 2007

AJG I Series 2007 The ASEAN Declaration for the protection and Promotion of the rights of Migrant Workers- What’s Next?

CMA, FES and Mujeres in Zamboanga organized the second AJG Advocacy Forum on OFWs, Irregular Migration and Trafficking on July 26, 2006 at Grand Astoria Hotel, Zamboanga City.
The forum focused on migration through and from Mindanao –both regular and irregular. It addressed the following questions: How does migration impact on Mindanawons specially the women, their families and the island as a whole. What is their situation and the problems they confront? How extensive are illegal recruitment, trafficking and undocumented migrants? How does government address overseas migration and the problems it entails?
ERRATUM:
The photos of Police Chief Inspector Ronald Añonuevo of the Philippine Council on Transnational Crime and Atty. Alejandre Diaz, Director of Anti-Illegal Recruitment Branch of the POEA, which appear on pages 16 and 18 were inadvertently exchanged. Our deepest apologies for this error.
Feb 05, 2007