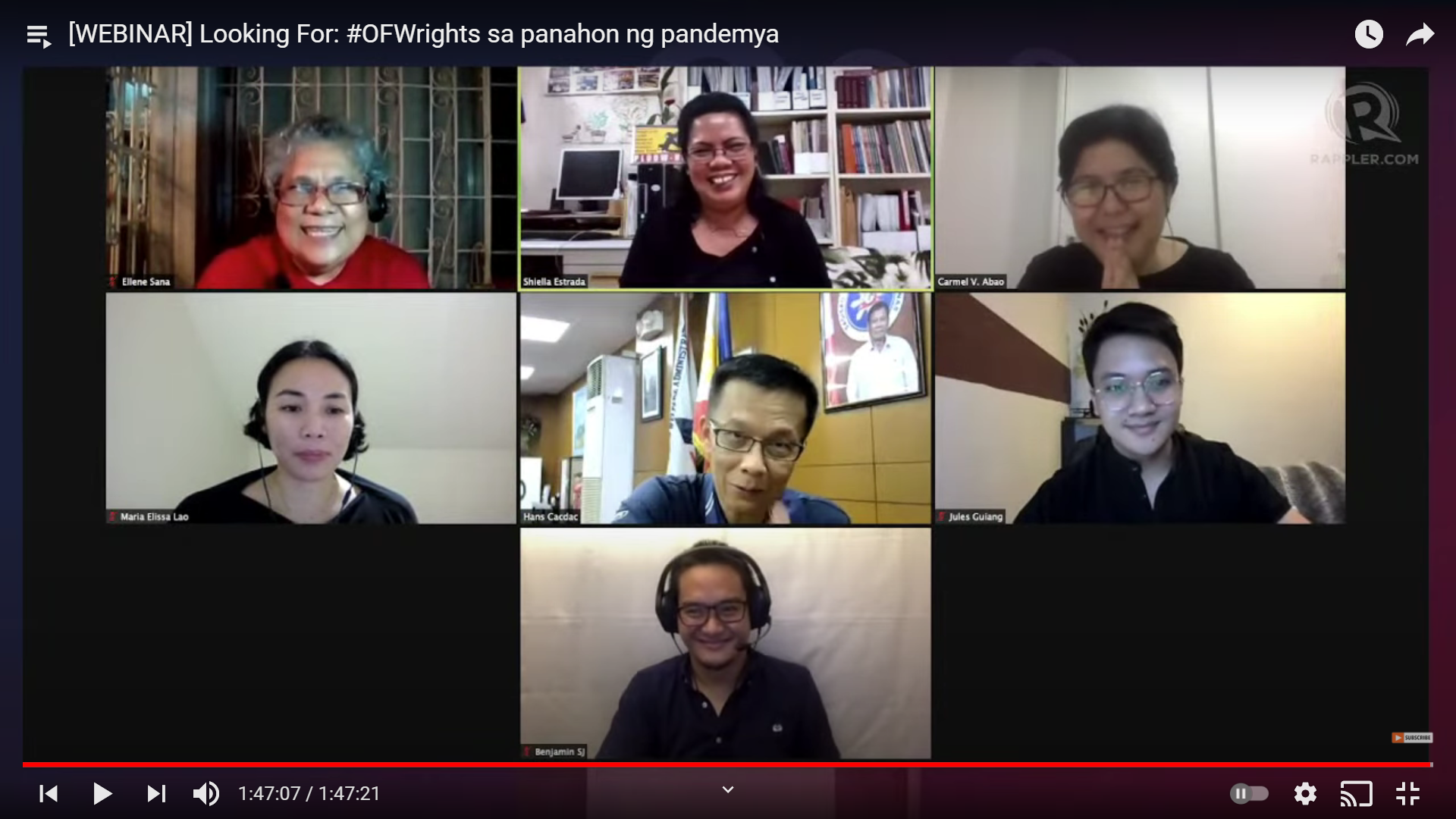 In a Rappler webinar held on Friday, August 13, the Center for Migrant Advocacy (CMA) and the Ateneo Working Group on Migration (WGM) presented their research findings on the welfare of OFWs amidst the pandemic, and broadly under the Duterte administration.

Representatives from the Overseas Workers Welfare Administration (OWWA) and the Progressive Labor Union of Domestic Workers in Hong Kong were invited to share insights on the presentation from the perspectives of the government and OFWs, respectively.

Implications of the Economic Recession on the Condition OFWs

In her discussion on remittances and government assistance to OFWs, Dr. Carmel Abao of the Ateneo WGM pinpointed the curious trend of increased remittances (in US dollars) amidst the pandemic. She said, “Kahit may pandemya at may krisis sa trabaho, patuloy ang pagpapadala ng pera ng mga OFW sa mga pamilya nila.”

Dr. Abao posed 2 possible explanations for her question: changes in the exchange rate, and the sacrifice of OFWs. The US dollar’s decrease in value may explain the former. Following this, it is a fair assumption that an OFW would have to send an increased amount of dollars for the peso value to be maintained.

The question of the sustainability of government assistance to OFWs was also raised. As the economy falls, so do people’s incomes and subsequently, so do taxes. The government may find difficulty in maintaining funds for OFWs with a decreased tax base. Dr. Abao also wondered how existing government assistance funds might be affected when the government begins to allocate money for the creation of DOFil.

Challenges Faced by Migrant Workers in the Pandemic

Dr. Melissa Lao of the Ateneo WGM touched on the precarity of working conditions and employment opportunities faced by OFWs. In the pandemic, migrant workers have experienced challenges such as increased workloads, confinement to home-based work, and the general feeling of fear.

Dr. Lao acknowledged the role of government assistance programs for OFWs but called attention to the weaknesses in the government’s ability to communicate such programs to migrant workers.

After reviewing current government policies and programs surrounding the deployment, repatriation, and reintegration of OFWs, Dr. Benjamin San Jose of the Ateneo WGM shared his expectations for the years to come. “With all these policies,” he said. “What does this mean regarding overseas employment for the next years?”

Dr. San Jose observed that things were back to business as usual. “No one is saying we should give repatriated OFWs jobs,” he explained. He suggested the continuation of policies focused on the management of migrant labor deployment by the government and recruitment agencies, as observed in the past.

Based on observation, Dr. Jose also projected that migrant labor— especially in healthcare and manufacturing—would be consistently in demand despite the existence of COVID-19 restrictions.

Questions on the Proposals for a Department of Overseas Filipinos

CMA Executive Director Ellene Sana weighed in on the priorities of the executive government and invited the audience to ponder on a few hard-hitting questions. Ms. Sana spotlighted the 2 bills in Congress pushing for the creation of a Department for Overseas Filipinos (DOFil). Ms. Sana advocated for people to examine the proposal much closer to ascertain if DOFil is truly something the Philippine government is prepared to manage and if it was more beneficial or detrimental for overseas Filipinos.

One major point of contention put forward was the function and existence of the OWWA following the establishment of DOFil. As per Senate Bill No. 593, the OWWA would no longer function as a welfare agency but more like a savings and insurance system for OFWs, much like Social Security System (SSS) and Pag-Ibig Fund.

Ms. Sana urged webinar participants and relevant stakeholders to ponder some questions: If the OWWA functions as a savings and insurance system, will OFWs still be obligated to contribute to the fund when they are permanently repatriated? Will the fund contribution be in addition to the SSS? Will the OWWA’s other programs for reintegration assistance, workers’ assistance, and on-site services be scrapped or absorbed by the DOFil?

Moreover, Ms. Sana stressed the great need for the government to focus on addressing adverse factors which cause mass labor migration in the first place before working to prematurely establish the DOFil.

An Exchange Between Reactors

Following the presentation of data, Administrator Hans Cacdac gave the audience a glimpse of OWWA’s repatriation and quarantine efforts for OFWs in the pandemic. Mr. Cacdac also shared data on OWWA’s accomplishments with regard to cash assistance distribution and livelihood programs for repatriates.

Shiella Estrada of the Progressive Labor Union of Domestic Workers in Hong Kong responded with an impassioned plea to the government. While noting the excellence and improvement in OWWA’s quarantine operations, Ms. Estrada brought to light that the bigger issue lies in what happens to OFWs after quarantine. She explained that there are people who have applied for certain reintegration and scholarship programs offered by OWWA, but are still yet to receive any benefit.

She recounted how deployed OFWs have had no choice to borrow money in order to continue sending money home because their wages— though the same— are no longer enough to meet their families’ needs. To illustrate her point, she cited the example of OFWs with relatives who have been hospitalized for COVID-19. Ms. Estrada pointed out that government assistance for swab testing and paying hospital bills has also been insufficient.

“Give us the names,” responded Administrator Cacdac. “Give us the people who need help and we will help them. ‘Yan ang promise ko.” He further explained that it would be more straightforward for the OWWA to extend nuanced assistance on a case-to-case basis than to provide these needs to the general public.